skip to main | skip to sidebar

I so need a new header! So, its up to you guys, my loyal readers to design one. If you do a GREAT job, you win a really awesome prize! It will remain secret, but it will be good! Come on, you know you want to! Cassandra, I bet you can win! I mean, you are the Paint Princess lol. Cheats, you can win too! You are a awesome blogger! And esmee, you have no chance! (Joking!) So, if you want to try and win, go right ahead! And now, I bid you a due.
Posted by Myth Maser X at 3:10 PM 2 comments: 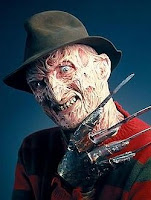 Halloween Post time! Ah these dudes are Scary, Awesome,and SCARY! Don't know what they look like? Picture time! ^-^ Look up, they staring at you *Insert backound lightning clash* Muahahahahahahaha! So, the poll is up, vote, its going to be there until Halloween itself! Pesonally, Freddy scares me the most. So thats why I am going to be him this Halloween :) Also, tell me what are you going to be in the comments!
Posted by Myth Maser X at 5:51 AM 3 comments:

Yesterdaywas 9/11. It was a bad day or the U.S.A. So, in honor of 9/11, I went to New York to see the grave sight of the Twin Towers. I dont have pictures for you guys. And par 3 of te Drake Father will be out soon. R.I.P. I give nothing butlove and hope for everyone who lost family on 9/11. Have you heard about Freedom Tower? They are trying to replace The World trade Center! Thats crazy!!! R.I.P. all losses....
Posted by Myth Maser X at 9:42 AM 1 comment:

The seacrch for the Drake Fathe part 2

When we last saw Ronan, Cassandra, And Brian, they got the shock of their lives. Enjoy: They screamed as the dark figure got closer. But then they realized it was just there friend Nicholas LionBlood pulling a prank on them. "Man, I got you guys good!"said Nick. "Nick, we don't have time for your pranks. said Ronan. "Why not old buddy?" asked Nick. "Ronan just got this letter via owl post" Ronan read Nick the letter. "Mythopolis?" "Cyrus?" "Father?" "Dude, I think your being punked." suggested Nick. "No way man, this is way too serious!" yelled Ronan. "We have to tell HeadMaster Ambrose about this" said Brian. "But Prof. Wu and Him went to visit Mooshu!" screamed Ronan. "Mooshu you say?" asked Cassandra. "Yeah, Hametsu village to be infact." Said Ronan. "Well, this is a conedece." I happenen to have some Teleportation Powder in a can." " I was saving it for farming, but this is important." said Cassandra. "Thanks Cassandra, you rock!" said Ronan. Ronan grabbed the can, sprayed it, and soon the dorm was filled with black smoke. 5 mseconds later, they were in Mooshu. "I will take th right, Brian, you take the left. Cassandra and Nick, You go look in the Commons." Ordered Ronan. "WAIT!" THERE THEY ARE!" yelled Nick. They ran for 5 minutes, but then they lost them. "I thought this might happen, so I brought my broomsticks!" said Cassandra. "Man Cassanda, you on a roll!" Brian said. They hopped on, and soon they were flying over Mooshu. "Hey! There they are!" said Ronan. They flew lower and lower until they landed in front of them. "Ah, Ronan, I Have been expecting you." said Ambrose. Stay tuned for part 3
Posted by Myth Maser X at 9:00 AM 1 comment:

The search for the Drake Father part one

I wrote this long ago, so if you dont like it, dont read it. Enjoy: Ronan Drake sat in his dorm waiting for his friends, Cassandra GriffonDamer and Brian DarkGlade. Ronan had called them. It was a emergency. Finally, they appeared through his door. "Finally!" yelled Ronan. " I just ot this letter" He read them the letter. Dear Ronan, you may not remember me, But I am your long lost father. He paued, for rian had something to say. " But Ronan, i thought you were a orphan!" said brian. "I am!" He continued. I had to give you to Cyrus Drake, for he is my broher. Ronan stared. "CYRUS IS MY UNCLE?!?" Ronan screamed. He continued. But, since of yeserday, I have heard that Cyrus is dead. So, I must start to raise you as my own child. Meet me in Mythtopolis. "What Mythopolis?" they asked in unision. Ronan stared athis Lynx Gazer. And then he remembered something. When he was a small wizard, Cyrus had told him, The answer to all your questions lye with the Lynx. He reached for the Lynx. But then something Dark and Evil sounding stopped him. "Halt! Ronan! You are under arrest for Grand Theft Portrait!" said the mysterous stranger. Stay tunes for part 2
Posted by Myth Maser X at 12:49 PM 1 comment:

Yup. Myth Master won. Not much to post bout. Well, I got a stupid mini- project or the weekend, its about Gamma - Ray Bursts. Woopie.... They are pretty cool. Look it up on the official N.A.S.A site. I dont have a like but I am pretty is www.nasahomepage.com Well, Myth Master X out!
Posted by Myth Maser X at 5:06 AM No comments:

Well, a few days ago I posted a poll. My friend Cassandra GriffinDreamer didnt gt to vote, so I let her tell me in game. She voted Myth Master X, Making Merlin and Myth Master X TIED. So, new poll, again, but only one vote per person. S, its going to be up in eeactly ONE minute.
Posted by Myth Maser X at 1:07 PM 1 comment:

Myth Maser X
I am insired by The Friendly Necromancer, I visited his blog since he made it, so now, well, i m blogging!